The pandemic has revealed that what my daughters call my “joke face” — a visual clue that I’m about to make a joke — can be recognized even while I’m masked (and not just by them). I try to assume a deadpan look but am rarely able.

Thirteen years ago, I had an opportunity to attend a taping of NPR’s Wait, Wait Don’t Tell Me in Boston with my wife and daughters. The guest was Barney Frank, our representative in Congress at the time and a noted wit. The date was two days after Barack Obama’s victory in the 2008 presidential election, and the Boston/NPR crowd was in a good and giddy mood.

I told my daughters, then 12 and 16, that Frank had a quick wit enhanced by a deadpan expression. They asked what I meant by “deadpan”; I started to explain, but then said, simply, “It’s the opposite of ‘joke face’.” That was easier than just giving them a dictionary definition, and they got what I meant.

But where does the term “deadpan” — or, as it is sometimes spelled, “dead-pan” or “dead pan” — come from?

Dictionaries and lexicographers are in general agreement that “pan” is slang for face with the “dead” part conveying the lack of expression. Most place the earliest use of the term in the theater or motion picture world in the 1920s.

The OED cites the earliest use as having appeared in the New York Times on November 11, 1928. It doesn’t give much detail, but I found the article, a compilation of film slang provided by a man named Frank J. Wilstach. (Wilstach, author of A Dictionary of Similes, was an interesting figure. You can read more about him in a Wikipedia profile I started.)

The top of the Times article, plus a blow-up of the “dead pan” definition, is shown here. 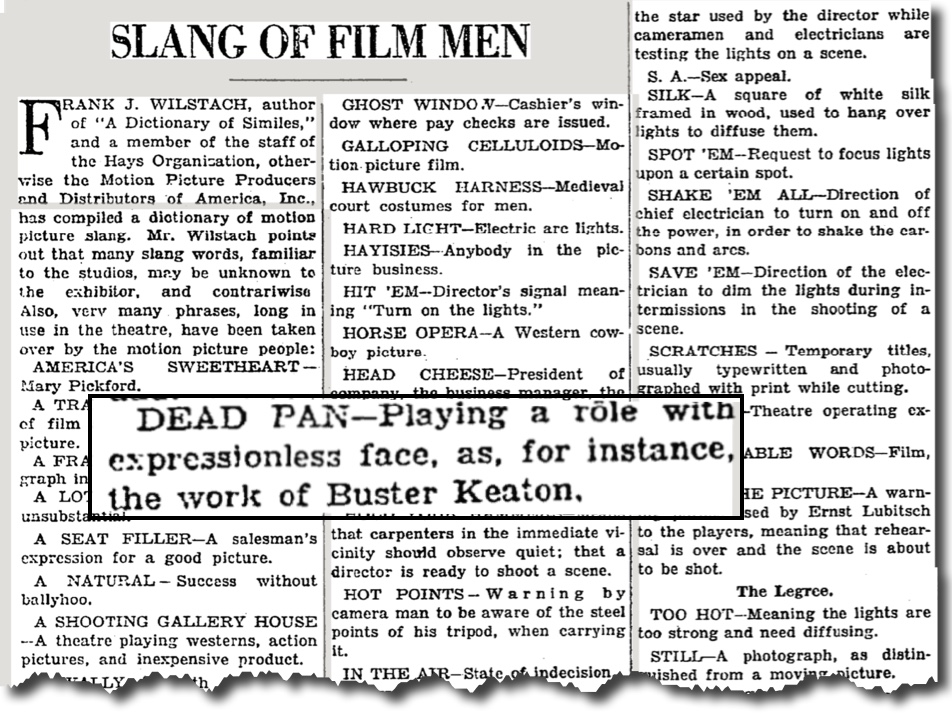 Merriam Webster also gives 1928 as the first known use of the term, although without a specific citation. They presumably mean the same New York Times article. A May 2018 post in MW’s “Words at Play” blog gives earlier examples — more on that in a moment — but their main entry for the term still shows 1928 as the earliest use .

Prolific word and phrase explorer Barry Popik published his extensive research on “dead pan” on his The Big Apple website in 2019. The earliest use of the term found by Popik, in a 1923 column by Damon Runyon, was in reference to the Argentine heavyweight boxer Luis Firpo.

“The expression,” writes Popik, “appears to have become popular in 1923, in entertainments such as boxing and movies.” That year and for years after, Firpo was regularly called “Dead Pan Luis”, as in this piece in the Detroit Free Press (August 25, 1923, p22):

The term was also applied before the end of 1923 to other boxers. It was also applied to a baseball player, the recently-retired Frank “Home Run” Baker, in an article contrasting his personality with that of more colorful players like Babe Ruth and Ty Cobb.

But these pre-1928 examples are all sports examples. Where is the theater or movie connection from which most sources agree the expression arose? Let’s go back to Merriam Webster and that 2018 blog post. “The word appears to have come from the language of actors in the early 20th century, when cinema was in its infancy,” it says, and it gives these examples as evidence.

Besides that he had a trick of what the actors call “the dead pan.” He never cracked a smile, and would be the last man you would suspect was working a trick.

The leading roles are played by Lil Dagover and Walter Janssen, while The Stranger is played by Bernard Goetzke who goes right out after the record as the champion “dead pan” actor of the screen.

These dead-pan boys, after frequent Palace appearances, still click with a snap. They have some new stuff, and the boneless ankle dancing banged.

Those last two examples are from more than a year after Runyon described Luis Firpo’s “dead pan” face. But the first example preceded Runyon’s use by more than eight years. So who was the actor with the “dead pan” trick?

It turns out he wasn’t an actor at all, but …. a baseball player!

The delightful story, shared by former St. Louis Cardinals manager Roger Bresnahan three or four years after it happened, is worth reading in full. (I’ve shared it at the bottom of this post.) But the gist of it is that the player, Cardinals pitcher Gene Woodburn, combined a talent for ventriloquism with a deadpan look to convince Bresnahan that he was being mercilessly heckled by a fan in the stands, almost leading to the manager going after the fan (before Woodburn confessed.)

(The Woodburn story is hard to resist — so I didn’t. I created a biography of him for the bio project of the Society for American Baseball Research. You can read more about his life story there: https://sabr.org/bioproj/person/gene-woodburn/)

So if Bresnahan was using “the dead pan” in 1915 and saying it was a trick that actors called by that name, where did he hear about it?

I have not found a use of the term earlier than 1915, but did find a quote that comes close, and it comes from someone more famous than Roger Bresnahan, Luis Firpo, Jack Dempsey, Damon Runyon, and everyone mentioned in this story with the exception of Babe Ruth. That person is George M. Cohan.

In a 1908 interview with Charles Darnton of the New York Evening World, Cohan, just back from London, complains about the British taste in humor:

It’s eight times harder to get a legitimate laugh in London than it is here. But the time is ripe for a manager to take over about a dozen American chorus girls and wake up the musical comedy game. The English chorus girls are dead–their pans are cold.”

To which Darnton, adds: “For a definition of ‘pan’ look in the mirror–not in the dictionary.”